Above are the details for the Full Moon, New Moon and Quarter Moon phases of the current month of July 2022. This Month starts with a First Quarter on Thursday the 7th of July. The Last Quarter is later in the month on Wednesday the 20th of July. The last major phase of this month is a New Moon on Thursday, July 28th. The Full Moon occurs at specific times and can vary depending on where you live. Check the Date and Times Chart below to see how the day and times can vary in your local timezone. 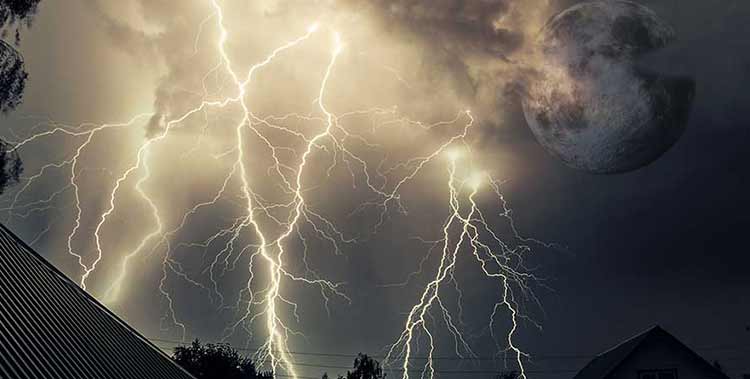 The Full Thunder Moon of July

July’s full moon is called the Full Thunder Moon, after the frequent thunderstorms that roll in during early summer. Thunderstorms are more likely to form in humid environments during summer because of the moist, hot air rising from the ground to the higher, colder parts of our atmosphere. The Full Thunder Moon is, therefore, a warning sign for a surprisingly dangerous time of the year.

Did you know that you are more likely to get hit by lightning twice in your lifetime than win the Powerball lottery, and that summer is usually when most lightning fatalities happen? As the Full Thunder Moon rises to prominence during the warm summer months, people are more likely to be taking part in outdoor activities, which increases their risk of being hit by the frequent thunder and lightning strikes that happen during this period. Everyone knows to avoid trees and bodies of water during thunderstorms, but that basic precaution alone is not enough.

According to experts, you should head inside a safe building immediately when you hear thunder, no matter how safe you think you are. Lightning can strike from up to 10 miles away, and nothing can protect you when you’re outdoors. Wearing rubber soles or crouching down low will not stop lightning from hurting you. Lying down on the ground is an even worse idea, as it’ll make you even more vulnerable to currents traveling through the ground.

If you do get caught outdoors with no way to make it into a building safely, sheltering in a completely closed, all-metal car is an option as long as you don’t touch anything metal. You should also avoid open areas such as fields. Just keep moving as fast as you can until you reach shelter. If you happen to be in a group, spread out so that if one of you gets struck, the others can provide emergency CPR and other help. Remember that it’s completely safe to touch a person after they’ve been struck. Lightning-related deaths are most often caused by the heart stopping due to the sudden surge of electricity, and so it is very important to administer CPR to a lightning strike victim immediately.

Ultimately, the best way to avoid being caught outdoors in a thunderstorm is to take a little of your time each day to monitor the weather situation, and have backup plans for shelter if you’re heading outdoors. That said, being indoor doesn’t necessarily guarantee that you’re safe either. Make sure to stay far away from any plumbing, metal objects, electronic devices and equipment, or anything that might conducts electricity. Avoid windows or doors at all costs. Not even concrete walls and floors are safe, since they contain metal rods that conduct electricity, so never allow yourself to lean against concrete walls or come into contact with concrete floors. The risk of a strike remains for 30 minutes after the last flash of lightning or peal of thunder.

The Full Thunder Moon is a great time for you to brush up on your lightning safety knowledge and educate other people as well. Feel free to head to the wild outdoors to observe deers whose velvety antlers are growing out during this period - which is why July’s full moon is also known as the Full Buck Moon - but also make sure to take the necessary safety precautions.

Local Date and Time for July 2022 Full Moon in major cities around the world: