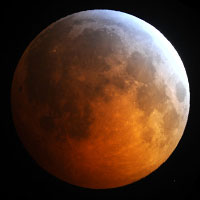 Penumbral - Will be visible in Europe, Africa, Asia and Americas

Partial - Will be visible in Australia, Europe, Africa and Asia

Total Eclipse - Will be visible in Asia, Australia, Pacific and Western North America

Total Eclipse - Will be visible in South America, Europe, Africa, Asia and Australia.

What is a Lunar Eclipse 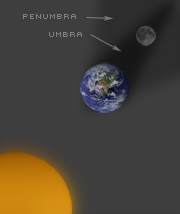 While other types of Lunar Eclipses can be viewed in wide regions of the earth the part of the eclipse that is "Total" is viewable is a much smaller region. The same can be said for the duration of the Eclipse. An Ecplise can last around 3 hours but the time that it is full is generally around an hour or less. 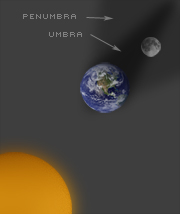 Partial Eclipse are generally visiable in a wide area of the earth. 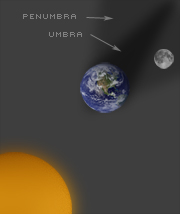 A Penumbra Eclipse occurs when the moon only enters the Penumbra area of the Earth's shadow. The Penumbra is a region of the shadow that is not completely obsured from the rays of the sun. This lighter shadow is a result of the relative size of the Sun to the Earth.

This type of Eclipse causes the moon to only darken slightly when viewed from earth and is one of the less dramatic Lunar eclipse.