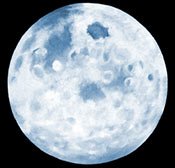 All Full Moon and New Moon times are UTC. For current Full Moon times in Europe, United States, Asia, Australia, India or your local location, click on the month in the calendar below.

MOON PHASE CALENDAR
Interactive Moon Phase Calendar for all months. Check It Out >

Full Moon - The moon is full when the moon is on the opposite side of the Earth from the Sun. Another way to look at it is that the moon, sun and earth are in a line with the eath being between the sun and moon. When this occurs the entire surface of the moon looks to be illuminated. The full moon occurs every 29.53058 days.

New Moon - A new moon occurs when the moon is between the earth and the sun. We are seeing the opposite side of the moon that the sun is shinning on. At the exact time of the New moon the moon is to close to the sun to see at all.

Black Moon - This is a term that is not used frequently and has no exact definition. Some sources use this term when there are 2 new moons in one month similar to the blue moon which is 2 full moons in a month. It is also the term used when there is no full moon in a month. Having a month with no full moon is very rare. It can only happen in the month of february since is has fewer days then the full moon cycle of 29.53 days.