The Full Moon for this month will occur on Saturday, April 16th. The New Moon is earlier in the month on Friday, April 1st. 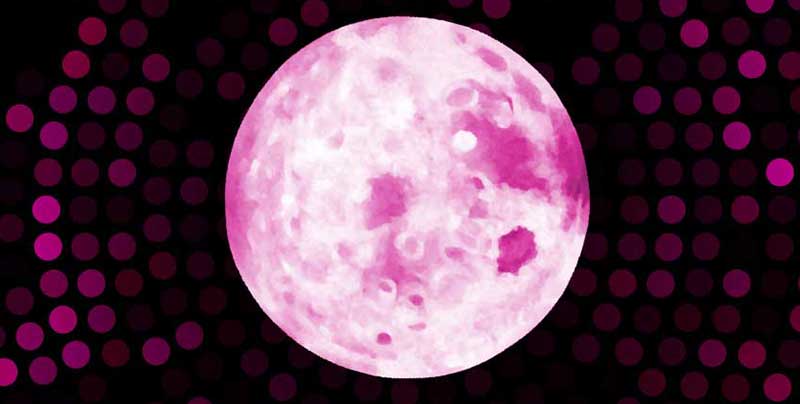 April’s full moon is widely known as the Full Pink Moon, even though it doesn’t actually turn pastel pink as the name suggests. The Full Pink Moon’s name comes from the abundance of moss phlox, a common little pink flower that typically begins to spread across the ground in early spring. With that said, this creeping phlox is not the only thing that begins blooming during the Full Pink Moon.

In many Native American tribes, April’s full moon is associated with the bustling life and vibrant growth of spring. In Sioux culture, it’s named after the sprouting of red grass. The Comanche tribe called it the New Spring Moon, and both the Tlingit and Sioux tribes referred to it as the Budding Moon, after the new plants that begin to bud and sprout during spring. The Cherokee tribe even called it the Flower Moon (though that name is also sometimes used to refer to May’s full moon), and celebrated it for the growth of useful medicinal plants and magical herbs.

At the same time, April is a time when rivers and streams begin to fully thaw. Accordingly, the Shoshone tribe named April’s full moon the Full Melting Moon, and the Arapaho tribe called it the Moon Where Ice Breaks in the River. It was also known as the Fish Moon because of the fish that would begin to swim upstream during this time. The Cherokees believed that flowing water was under the control of a spirit called the Long Man, and so would perform rituals to honor him during the Full Pink Moon. An example of a ritual like this was the Knee Deep Dance, based off the movements of the Water Frog. The Assiniboine tribe also called April’s full moon the Frog Moon.

Water is not the only thing that starts to flow during the Full Pink Moon - this is also the time where maple sap begins to flow in earnest, marking the true beginning of the incredibly important sugar-making season. The Abenaki tribes called April’s full moon the Sugar Maker Moon, and the Ojibwe called it the Sugarbush Moon. The Ojibwe tribe would journey north to their spring camps to tap maple syrup and engage in spear fishing. Maple syrup was integral to Ojibwe culture: not only was it a crucial method of seasoning all their foods (they did not have access to salt at that time), but it also symbolized harmony within the community and with the forces of nature around them.

The Full Pink Moon also holds religious significance in other cultures. For example, in Islamic communities around the world, April’s full moon is celebrated as Bara’at Night, also known as the Night of Innocence. Muslims offer up prayers, asking God to absolve dead ancestors of their sins. They also prepare sweet desserts such as halwa or zarda and give it out to children, the needy, and other members of their community. Meanwhile, Christians call it the Paschal Moon, and celebrate the first Sunday after April’s full moon as Easter Sunday. It’s possible that the reason why the Easter Bunny brings eggs is because April’s full moon is also known as the Egg Moon, given that animals such as geese begin mating and laying eggs in spring.

Local Date and Time for April 2022 Full Moon in major cities around the world: