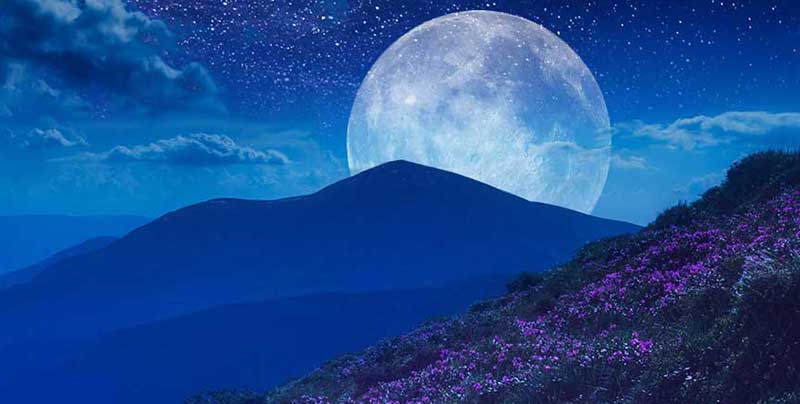 The sweetest full moon of the year is June’s full moon, commonly known as the Full Strawberry Moon. While the full moon itself is inedible, despite how round and delicious it may seem, the Full Strawberry Moon marks strawberry harvesting season in North America. Most Algonquin tribes understood that it was a sign that wild strawberries were starting to ripen and ready for the harvest. Delicious though ripe strawberries may be, June’s full moon has another name that’s even sweeter.

What could possibly be sweeter than strawberries? Try honey. In Europe, June’s full moon was actually known as the Honey Moon. Other European names for it included the Hot Moon, signifiying the beginning of hot summer days, or Hay Moon, because of the first hay harvest. Those names aside, European names for the Full Strawberry Moon overall tend to have sweet, romantic connotations - a good example is the name Full Rose Moon. June’s full moon is also called Mead Moon, which could refer to the mowing of meadows during summer, but there’s another more romantic interpretation as well.

In Europe, it’s traditional to gift mead or honey to a newlywed couple during their first moon of marriage. The name Honey Moon itself has now become a common word in the English language, used to refer to the honeymoon holiday that couples go on right after they’re married. It used to be that newlyweds in ancient Europe would go on a sweet romantic holiday around the time of June’s full moon, because the moon phases were seen as a symbol for the phases of a marriage, with the full moon signifying the fullest and happiest part, the wedding itself.

The Full Strawberry Moon is tied to romance and marital bliss all around the world. In India, for example, June’s full moon is celebrated as Vat Purnima, where married women perform a ceremonial ritual to show their love for their husbands. Vat Purnima is based off a legend from the Mahabharata, about a beautiful woman, Savitri, who is determined to save her husband, Satyavan, who is doomed to die an early death. Savitri fasts for three days before Satyavan dies, upon which she successfully negotiates with the King of Hell for the resurrection of her husband. Similarly, married women nowadays dress up in beautiful saris, fast, and tie a thread around a banyan tree seven times to wish that their husbands will lead long, happy lives.

It is no wonder, then, that the Pagans also call June’s full moon the Lovers’ Moon. This is an excellent time to work on the connections in your life, romantic or otherwise, by showing affection to your loved ones and allowing yourself to be vulnerable to encourage intimacy in your relationships. During this Honey Moon, some Hoodoo practitioners will even use honey in magic rituals to sweeten other people’s feelings towards the practitioner. An example of a sweetening ritual is to pour honey into a saucer containing the target’s name, before lighting a candle on top of it. Another example of a honey ritual is to tie two poppets together with honey between them, in order to heal a broken relationship between two people. Honey rituals aside, true magic may happen when you invest your time and effort during this month to work on your relationships and appreciate the love you have in your life.

Local Date and Time for June 2021 Full Moon in major cities around the world: